Brent Foster has won the fine ocean swimmers series NZ after finishing the series as he started it: by coming 2nd in Auckland to Phillip Ryan. Way back on December 13, Foster ran 2nd to Ryan at the Auckland City Masters Bays Swim. In Auckland on April 10, he ran 2nd to Ryan at the ACM Rangitoto Swim. Ryan scored 100 fine ocean swimmers series points each time. But they are the only series swims he did, so while he finished on 200 points from two swims, he was in the end almost 400 points behind Foster, and failed to qualify by not completing four of the series' six swims.

Foster beat last year's finest ocean swimmer, Bruce Smith, into 2nd place. It's another outstanding performance by Smith, in his 7th decade, while Foster is in his 5th.

Foster now gets the choice of one of two travel packages - to Vanuatu for Espiritu Santo Swim Week in May-June, or the Mana Fiji SwimFest in October. The travel package that Foster does not take will then go to a draw of the remaining qualifying swimmers.

The event program was -

At the end of six rounds, there were 13 swimmers who qualified for the series by virtue of having done at least four of the series six swims. Here is the finishing order - 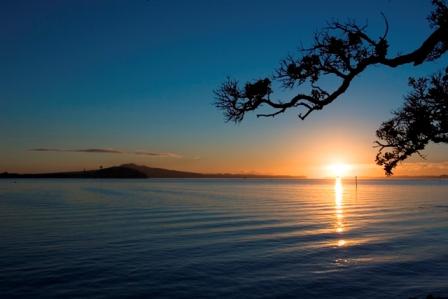 The series uses the oceanswims.com handicap system, with each swimmer's time being weighted for age and sex to produced handicap results. It makes it possible for swimmers of all ages and both sexes to compete validly with each other. It’s not just for “the usual suspects”.

The series provides structure and direction to the open water and ocean season in New Zealand, promotes the sport generally, encourages swimmers to do more swims, particularly swims outside major population centres, and allows all swimmers to compete on level terms. Swims in the series have been selected for their chronological spread throughout the season, their geographical spread (initially in the upper North Island, eventually spreading farther afield as the series establishes), and for diversity in the size of swims and types of water in which they take place. We have harbour swims, ocean swims, river swims and lake swims in the series, some in salt water, some in fresh water.

Swimmers must do four of the series’ six swims to qualify for prizes. All swimmers who take part in series swims will win points. Final points will be the tally of all swims completed. The more swims you do, the more points you earn.

Where we can distinguish between swimmers who wear wetsuits and those who swim newd, we shall add 10 per cent to the wetties' handicap time, to level the playing field. Opinions vary as to how much advantage a wetsuit provides to a swimmer, but in our experience from talking with coaches it ranges up to 20 per cent. So we're taking a middle course. We want the playing field to be as level as possible.

The handicap pointscore makes it possible for a swimmer of any age and either gender to win the series. When we’ve run a similar series in NSW over the past six years, past winners have been a truckie (age 40), a graphic designer (age 55), a horse breaker (age 56), a female clerical assistant (50), a lady in her early 60s, a lawyer in his late 50s, and a lady tennis coach (50).

Note that prizes in the series are not transferable, other than by oceanswims.com, and they must be taken in the year of award.

The series is organised by oceanswims.com and is supported by Air Vanuatu. It's a sibling series to our fine ocean swimmers series nsw, now in its ninth year.

Auckland sexagenarian Bruce Smith has won the 1st inaugural fine ocean swimmers series NZ. After six rounds, finishing with the 5 Bridges Swim at Hamilton, Smith 541.93 points from all six swims, to beat another Aucklander, Andrew Stevens, by 16 points. Jenny Stark was third with 508.41. All three placegetters completed all six swims in the series.

Well done, all of youse.

The Leaderboard after five rounds in the series is -

And for all Hamilton results, to see how you went... Click here

Remember, everyone who finished a series swim earned points in the series. Points are calculcated by weighting each swimmer's time for age and sex, so making it possible for all swimmers to compete validly, irrespective of age and gender. There's no need to enter the series separately. Newd swimmers receive a 10 per cent time bonus over wettists. Garry Chapman shows how unnecessary wetties can be in ocean swimming. He was in the 7.5km swim at the Mount.

The course at Hamilton spirits you through the city.

Get our email updates...

Keep up to date with the fine ocean swimmers series nz, and with goings on in ocean swimming, by signing up for our email updates... Click here

If you have any enquiries about the series... Click here